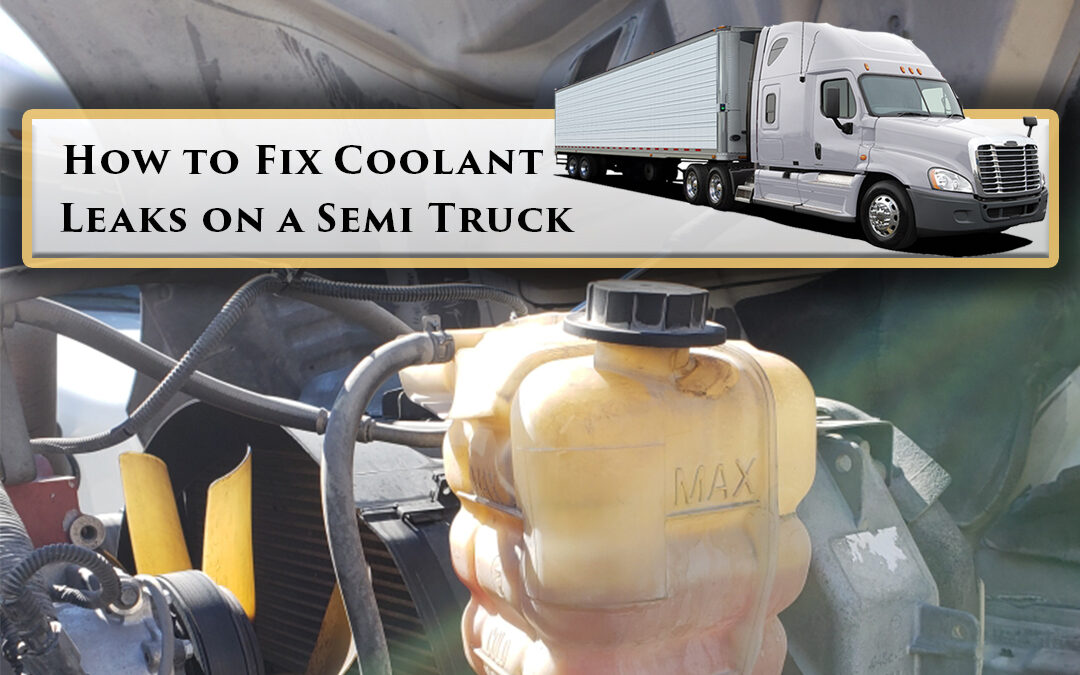 How to Fix Coolant Leaks On a Semi Truck

Coolant systems are notorious for causing leaks, because the coolant fluid travels to a lot of different places – the after-treatment system, the heating system, and the engine.

Coolant actually runs all the way to the back of your cab. There’s basically coolant from the nose to the end of the sleeper.

If it leaks anywhere, it’s all the same coolant system, so anywhere that has a leak in that system is going to cause you problems. Some areas are easier to get to while others can pose a challenge.

When you’re on the side of the road, the last thing you want to be dealing with is a coolant leak. Believe me – we get it. On-the-road service is overpriced and time-consuming, and while learning to fix it yourself can take a little practice, we’re here to help.

What Is the Function of a Truck’s Coolant System?

Your truck’s coolant system is a closed system that exists to keep the engine cool and running at optimum temperatures. It also keeps other components of your truck cool, mainly the after-treatment system. (That’s not technically part of your engine – it’s your exhaust, so to speak. The after-treatment “treats” the exhaust that’s leaving your engine.)

Coolant is also used to heat the interior of your cab. When you turn on your heater and hot air blows out, you can thank your coolant system.

There are at least 2 different kinds of coolant. They’re green and red, and they both smell about the same. They’re good for different temperature ranges.

In your car, you probably use green antifreeze. For our trucks, we only use the red coolant. Just about everyone now uses red coolant with semi trucks. We say this to let you know that when you’re looking for a coolant leak, it could potentially be green or red.

Note: It’s very important that you never mix red and green coolant! If your coolant reservoir has red coolant, do not add green coolant and vice versa.

How Coolant Is Sold

Coolant is sold as “pre-mixed” or as concentrate. There may be different levels of concentrate, but the one that we buy for our trucks is a 50/50 mix. For every gallon of the concentrate, you put in one gallon of water.

Tip: If you’re running low on coolant, and you’re just trying to get to a safe place, you don’t want to fill your reservoir with straight concentrate. You have to add water as well!

Let’s say you don’t have any leaks, and there are no coolant system issues – you’d think you’re golden, right?

Coolant breaks down over time, and it’s recommended you replace it just like you would oil in your car. The difference is that oil gets dirty, and coolant actually breaks down. That just means that coolant doesn’t have the same properties that it once did, rendering it less effective as time goes by.

You should definitely change your coolant at least once a year. Coolant is like oil – it breaks down and loses its alkaline level over time.

As always, staying safe is the most important thing, so safety tips first!

Here are a few tips to make sure you don’t get hurt when addressing a coolant system leak:

How to Tell Your Coolant System Is Leaking

There are a few tried and true ways to confirm that your coolant system is the problem.

Many mechanics and drivers can tell right away by the smell of leaking coolant. It has a sweet, antifreeze scent that’s very potent and distinguishable.

If you can, consider actually smelling coolant so that if you ever do experience a leak, you’ll know right away where it’s coming from.

You can also look at your reservoir and see if your coolant is low.

You’ll also get a check engine light if the coolant system is overheating. The gauges will show you that things are running too hot. If the gauge is reading anywhere from 185-210+, you know there’s an issue, and you should pull over and stop the truck immediately.

If the truck keeps running, you’re risking damage to the engine or the Exhaust Gas Recirculation (EGR) cooler, which is a part of the after-treatment system, and it costs a few thousand dollars to fix. As a side note, Cummins engine are great (they’re the only engines we buy), but in our experience, one of their most common failure points is the EGR cooler.

At this point, we have a number of ways to confirm that we have a coolant leak:

Once you’ve confirmed that it’s most likely a coolant leak, you want to look around the vehicle while it’s not running to identify where it’s leaking.

If you’re not able to find a leak, sometimes the pressure from the truck running can create enough pressure to cause the leak. First check with the truck off, and if that’s not successful, turn the truck back on and look around for that pesky leak.

You can also look under the hood to see if something is happening physically. This will come in the form of a broken belt or fan.

The most common reason for a coolant leak is the weather. If the truck is cold, it’s common for the coolant to be low.

When you do look under the hood, pay special attention to the hoses.

If the hose is swollen in any way, it’s a sign that it’s failing or is going to fail. Additionally, the hose surface can become very dry or look cracked, which is a sign that it may be causing a leak.

Let’s say you’re on the side of the interstate, or maybe you’re even 100 miles from home. Whatever the case may be, there are certain situations where you want to get to a safer place or make it home if you can.

In these situations, there is a temporary solution. However, this is NOT a long-term fix. This should only be done in order to help you get to a safe spot.

To temporarily fix a coolant system leak, you can get away with taping the problem area really thoroughly. It’ll slow the leak enough to where you can get somewhere safe. Please note that this is truly a temporary fix.

Some drivers will say, “It’s just a pinhole leak. I’ll tape it and be on my way!” Not the case. This should be used only in temporary situations.

To tape the hole temporarily, you can use duct tape, electrical tape, or a new product we’ve been using that’s a silicone tape. It’s pretty cool stuff – it looks similar to electrical tape but it’s a bit thinner. If you take it and wrap it around on itself and you stretch as you do it, it activates the tape. It ends up feeling like a piece of plastic. It’s the strangest thing, and it’s not very expensive. We bought 6 rolls for $20 or so.

Once you have the problem area taped really well, you need to address the lack of coolant in the reservoir.

Coolant is obviously the best thing for your truck, but with the lack of availability, you can put water into your coolant system in a pinch. It’s not good for the radiator long-term, because the water would be corrosive, but versus having no fluid and risking overheating, water is a much better option.

Let’s put it this way – if a driver said they were a few hundred miles away and they had a slow coolant leak, I’d recommend they add water to the coolant reservoir.

Tip: Always keep a few gallons of water or coolant in your truck!

Most of the time, it’s a hose that’s causing the leak. Permanently fixing the coolant system leak can be as simple as swapping out that hose.

The hard part, though, can be tracking down the hose you need.

However, once you determine and purchase the hose you need for your truck, changing out the hose can be done pretty easily.

Get a screwdriver or a ratchet and socket to loosen the clamps on both sides of the hose. Remove the old hose and replace it with a new one. Finally, reinstall the clamps and coolant.

Once you’re comfortable with this process, you can change a hose on the side of the road.

What happens where there is air in the coolant system?

If the coolant keeps going low because of a leak, the entire coolant system can get aerated, which means there’s air trapped inside. This eventually ruins the pump and can cause overheating.

This can sound sort of confusing, so let’s take a brief moment to explain why air is such a problem inside your coolant system.

It all starts with the exhaust. The exhaust comes off the exhaust manifold, and it runs through what’s called an EGR cooler.

The coolant does a great job at cooling the exhaust down, but air? Air does a really bad job.

If there’s a lot of air in the coolant system, you’re not getting enough coolant through the EGR cooler. You’re getting partly air, partly coolant.

Things start getting hotter and hotter, and before long, the coils in the EGR cooler, which are soldered on at each end… well, they melt.

And when that melts, coolant starts leaking where it’s really not supposed to be.

Now you have this cooler that’s supposed to cool the exhaust, and instead of the coolant recirculating through the system, it’s leaking everywhere.

You might also notice white smoke in this situation. No good!

If you’re on the road, there’s really only one thing you can do for a coolant system that has a lot of air in it.

Fill up the coolant reservoir with coolant fluid and leave the cap off. Let the engine run on the side of the road for a little bit and try to top it again with more fluid. Once you put the cap back on, run it again.

Ideally, you want to have a pressure test, but that’s not feasible to do on the side of the road.

We hope this helps if you have a coolant system issue while you’re on the side of the road!

If you’re interested in becoming a driver here at Freight X, let us know! We’d love to add you to our family of wonderfully dedicated drivers.

Freight X, LLC is a transportation company with terminals in Georgia and Florida. We run freight of all kinds and have the capacity to run reefer or flatbed loads. We are always recruiting new drivers, so please contact us if you’re interested in joining the team.